I write this as I am preparing to enter the studio for a few days to record some songs that I have written with some friends of mine.  The other musicians that I am playing with are well known for nailing their parts in one or two takes, so this makes me a bit nervous!  How do you have fun, be creative and play to your full potential under the pressure of time constraints and getting it done in just a few takes, with everyone else watching/listening? It’s very different from banging out a demo in your back room over the course of a few weeks!

Most important, I think, when recording PLAY WITHIN YOUR ABILITIES.  It sounds obvious but if you’re anything like me then I always like to push myself slightly beyond my present skill level when practicing/writing/rehearsing, it’s how I get better, but this is not a good idea when recording.  Simply put, if you can only play a specific lick perfectly 3 times out of 10 when practicing then don’t bother trying to record it in the studio. You may think that this sounds uncreative, boring or defeatist, but trust me, when you are stood in the control room and that record button goes down and the sound isn’t quite what you’d like, people are waiting for you and your hands are sweating, that 30% success rate will drop to 5% very quickly! Do you want to do 20 takes in front of your peers? And if you’re anything like me then after about 5 takes it’ll get worse, and worse, and worse!

Play the lick that you can nail 8 out of 10 times and all of a sudden you’ll be confident, more relaxed  and you can concentrate on the smaller nuances of the lick such as timing and vibrato rather than just trying to simply ‘achieve’ it.  OK so maybe there’ll be one other guitarist who would be more impressed if you nailed the other trickier lick, but much better to concentrate on the feel and timing and you’ll sound better to EVERYONE.  If you really want to play that trickier lick then you’ll just have to practice it more until you can nail it 8/10 times, THEN you can record the song!  Remember just because you find something easy to play this doesn’t automatically make it boring to everyone else.

PRACTICE WITH LESS GAIN/DISTORTION.  Get used to playing your songs with a sound that you are not quite so comfortable with.  Every time that I have recorded a rock song the guitars always sound better the cleaner that they are, even for a very heavy track, especially when layered up.  If you really listen to the guitar sound in a lot of heavy rock songs it is never usually overly distorted even though the overall sound is heavy, eg. AC/DC.  The guitar will get lost in a mix if it has lot of distortion and the melody won’t stand out.  You might be used to practicing with lots of distortion and gain, as it’s easier to play, it sounds heavier by itself and it disguises many, ahem, technical weaknesses, so the moment your sound gets cleaned up you may find it much harder to get those riffs sounding smooth.  So practice with low gain, or even on an acoustic for extra finger strengthening as well.  That will really sort out your technique and expose any potential problems.

Jamming the songs first with the other musicians is a must, but also RECORD YOURSELVES AND LISTEN BACK and if possible record a demo of it with them too.  This will show up any ‘gaps’, dodgy harmonies or timing issues that may not be so obvious when you’re jamming it all together.  Also BE HONEST WITH YOURSELF, how good does it really sound once recorded, are you playing what the song really needs?  If the sound seems a bit lacking or some parts are getting lost in the mix then you should work out some alternative fingerings and positions to play them in.  For example in my particular recording session we have two guitarists and we are trying to make sure that we’re never both playing the same thing in the same position. We usually want to fill up as many unused frequencies as possible to get a nice big sound and plenty of variety in the guitar lines.  This will help to give interesting harmonies and melodies to keep the listener’s attention. I also try not to just follow the bass line if I can create something that sounds better and we will often harmonise the guitar lines using intervals such as 3rds, 4ths, 5ths or octaves.  All of these ideas can help your guitar stand out from what can often become a very crowded mix with today’s sounds.

Which leads me to the next suggestion, CHECK YOUR THEORY.  Make sure that you know what key every song is in, what modes you will be using, the chord progressions and some alternative fingerings.  If someone comes up with a good idea and a quick re-write is called for then you don’t want to be taking ages figuring out all of the above.  Much better to go in armed with this information than try to figure it out when you are on the clock! (Of course filling in a Cheat Sheet for each song from our book The Guitarist’s Solo & Songwriting Companion is the perfect way to be prepared!). 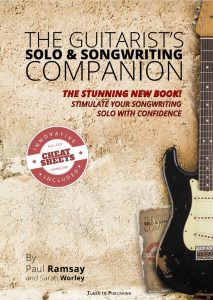 And last but not least SORT OUT YOUR GUITAR SET-UP. There’s no bigger downer in the studio than trying to fix a dodgy lead, pedal or amp.  Arm yourself with spare valves, leads, strings and picks.  Fit new strings, at least a few days before the first session to get them stretched in, and sort out any unwanted fret buzz with a few bridge adjustments.  Check the intonation of your guitar, some engineers/producers get very ‘particular’ about intonation, – I have even heard of engineers re-setting the intonation depending on which barre chord the guitarist is playing!

Practice like crazy the weeks leading up to your session, toughen up those callouses, and I like to take a day or two off right before I start to build that hunger, …and I usually play better after a short break.  But that’s just me.