After seeing Vinnie Moore tear it up with UFO at the Ramblin’ Man Festival, I decided to re-visit one of my favourite shred albums of all time and have another bash at learning ‘Lifeforce’ from his classic ‘Mind’s Eye’ album.  So after a couple of hours I hit the point that I’m sure 99% of you have hit when trying to learn another artist’s work, that part of a solo where he just goes nuts. The playing is very fast, the notes appear to be quite random …and I give up!  But this time I decided “No, enough is enough, I’m going to nail this!”, …but how?

Well rather than just try to copy his notes ‘parrot fashion’ for hours/days on end and build up the speed, (VERY boring, and largely pointless), I gave it some thought, and came up with a bit of a breakthrough for my playing.  It went a bit like this;

This is such a simple but great idea, because if you think about it when he recorded it he likely just played what HE finds comes naturally for the fast bits.  This is his style, so you should play in your own style, because everyone’s different.  OK when playing a cover the main theme/melody needs to resemble the original fairly closely, but for the fast solo bits, ..it doesn’t matter.  It really doesn’t.  No one cares.  In fact this is the perfect time to add a bit of your own style to the song.  Play to your strengths, and maybe actually FINISH the song!!

So what’s your favoured technique if you want to play some fast notes?

It doesn’t really matter what works best for you, we just need to play something resembling this tricky passage using ‘your licks’; starting from the same place – going in the same direction – finishing on the same note.  And provided that you can hit the beat and play it with conviction you’ll blow people away just the same.

I have found that this also has the huge bonus of massively improving/expanding my playing and improvising skills, I’ve stretched my brain a bit, discovered new patterns and I’m developing my own style for ‘fast’ bits.  If you really listen to most successful guitarists they have a certain pattern/technique/sequence that they usually ‘default’ to when playing fast.  So develop your own, maybe a few, that can be adaptable for both straight 4/4 time and a shuffle, learn how to move these sequences around the neck for different keys or modal sounds.

I used an accurate TAB transcription from a magazine put it into Guitar Pro and tweaked these fast sections to licks that better suited my playing.  Which is a nice way of making sure that you’re keeping the timing and not straying too far from the orignal.  Play along at a slower speed until you can nail it, then increase the tempo until you’re there!

Now I can keep up with the whole song, which is very satisfying and damn fun to play!  When I get around to recording a backing track I’ll post a demonstration video to go along with this blog.  Here’s how my version (2) varies from the original (1): 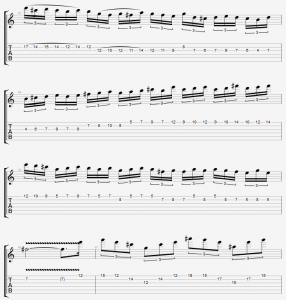 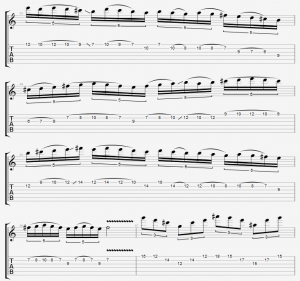 (You should be able to click on the images to get a clearer image).

So you can see that my version looks pretty different, but when played at 152 bpm they really don’t sound that different, …and I actually prefer my version now, which is a good thing I guess!

So dig out those old tunes that you gave up on years ago, give this method a try to get past those road-blocks, and put the pedal to the metal!

..and what better way to discover those patterns that best suit your fingers than in our book!